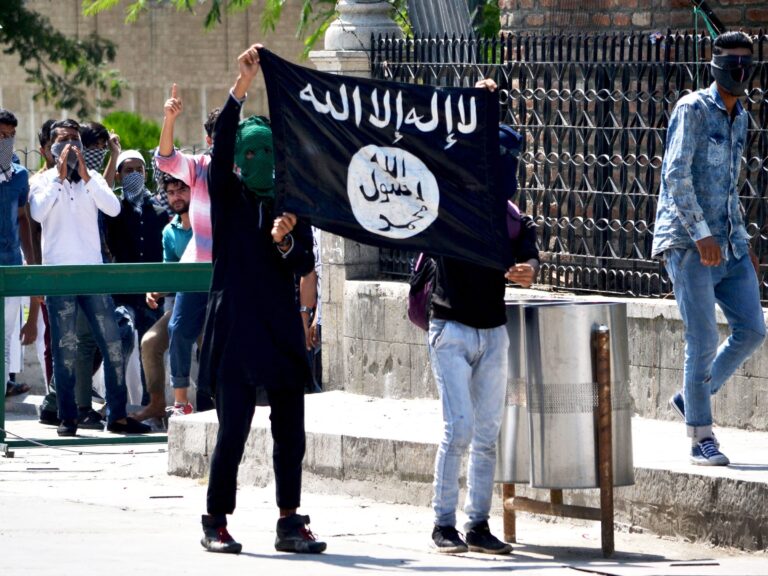 The use of monochrome flags is an ancient Eastern, Arab and Islamic tradition. Its significance has changed over the centuries. Some believe that one of the Prophet’s original banners, known as the Uqab, was black.

Several hadiths or traditions in Sunni Muslim sources speak of the appearance of an army carrying black flags or banners from the East, specifically Khurasan (Khorasan), in support of an apocalyptic messianic figure, the Mahdi, at the end of time.

Most Hadith scholars regarded these traditions as-fabricated Abbasid propaganda that was never uttered by the Prophet, used to legitimize the Abbasid overthrow of the Umayyad Caliphate in the 8th century – the Abbasid army actually came from Khorasan with black banners.

In the modern era, black flags with the Islamic declaration of faith have become very popular amongst Jihadist and other Islamist groups. These groups also often use the aforementioned fabricated hadiths to legitimize their own causes, and in turn claim to be almost Messianic movements.

For example: Al-Qaeda, al-Shabab in Somalia, Boko Haram in Nigeria, Jabhat al-Nusra in Syria, al-Tawhid wal-Jihad in Iraq, Jihadist fighters in Chechnya and of course the self-styled “Islamic State,” formerly “The Islamic State in Iraq and Syria” (ISIS) have all adopted black flags, with white Arabic writing consisting of the two basic Islamic declarations of faith (the shahadas), as their emblems.

The extremist but non-Jihadist international group, Hizb al-Tahrir, also employs a black flag with white shahadas, as its emblem. All these groups occasionally reverse these colors: a black flag, al-rāya, for war; a white flag, al-liwa’, for peace. A white flag with black shahadas was especially adopted by the Taliban in Afghanistan for peacetime.

A black background with the shahada written in white, more specifically, is supposedly the flag of the Muslim army as a whole; hence, there may be multiple flags (as opposed to if it was white). This flag is most commonly associated with militants – indeed, it has been referred to as the flag of jihad.

Depending on what groups is using it, there is some variation in this flag – in some cases, there is a circle with an inscription within it that is said to represent the seal of the Prophet Muhammad. 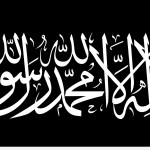 Flag used by various Islamist organizations (e.g Hizb ut-Tahrir)- not with any specific group specifically. The writing has the shahadas, or two declarations of the Muslim faith: “There is no god but God. Muhammad is the Messenger of God.” 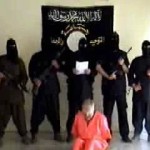 Jama’at Al-Tawhid wa l-Jihad (Monotheism and Jihad Group), Iraq – the flag has the shahadas plus the name of the group 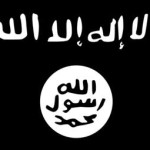 Islamic State (IS, formerly ISIS or ISIL), al-Shabaab, Somalia and Boko Haram, Nigeria – used by Al-Qa’ida also. Flag has the shahadas in a more primitive script, with the second shahada in the shape of a seal. 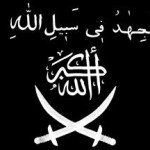 Caucasian Mujahideen, Chechnya. The script says, “Jihad in the path of God. God is the greatest.” 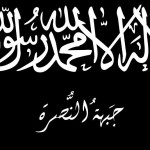 The shahadas plus the name of the Al-Qaeda-affiliated group in Syria, Jabhat al-Nusra (Victory Front) 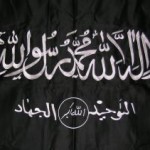 The shahadas plus “monotheism” and “jihad” on either side of a circle containing “God is greatest”: Al-Qaeda in Iraq 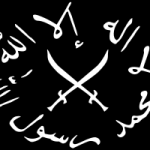 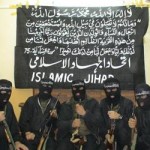 The shahadas followed by a Qur’anic verse (4:75), “What is the matter with you that you do not fight in the way of God and of the oppressed: men, women and children who say, ‘Our Lord! Bring us out from this town whose people are unjust; appoint for us from Your Presence a powerful protector, and appoint for us from Your Presence a strong helper!” – Islamic Jihad Union, Palestine 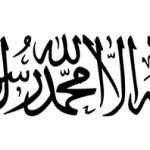 The shahadas: peace-time white Afghan flag under the Taliban 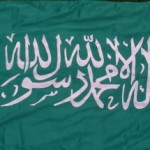 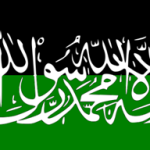 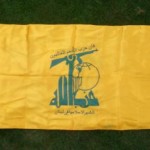 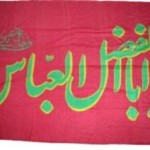 The shahadas with a yellow circle denoting the sun: Al-Qaeda

The shahadas with a sword – Saudi Arabia

Given the plethora of existing flags, and the confusion surrounding their use and meanings, it is of great importance that we correctly distinguish between them. The failure to so could unintentionally ‘muddy’ a debate that is in desperate need of clarity in order to produce effective policy and counter-narratives.

Not all flags which contain the Muslim testimony of faith, the Shahadah, are “Islamic” flags. For instance, the black flag used by ISIS is inspired by the Abbasid Dynasties flag, whose claims of prophetic traditions, and hadiths, have been largely denounced as unauthentic by Islamic scholars.

The ISIS flag has never previously been used, and therefore should be denounced for what it represents — ISIS, not Islam. It should also be distinguished from flags used by other Islamist or Jihadist groups in order to avoid any confusion, or worse, absolve those truly responsible for abhorrent actions due to a misunderstanding.